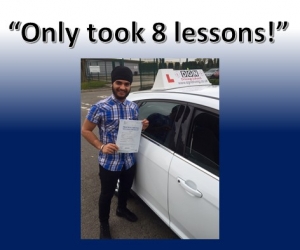 Congratulations to Navjoth Singh of Wolverhampton on passing his practical driving test at the first attempt on 12th October 2015.

Navjoth drove really well during the driving test and almost picked up a clean sheet, making just one minor fault!

Navjoth can now focus on his ambitious plans ahead and enjoy driving independently.

Best wishes from your driving instructor Pin and all the team at DGN driving school.

About the Author: Pin

Founder of DGN Driving School. If you want to check out more great DGN learning resources, our YouTube channel has loads of great videos.

We Can Deliver On Projects